These lentil stuffed peppers with cilantro lime rice are whole food plant-based goodness! The lentils are tossed with black beans and corn in a spicy sauce made with adobo sauce, roasted tomatoes and roasted jalapeños. Then simply bake these in the oven for 30 minutes and serve with a squeeze of lime, romaine and cashew sour cream. Great for meal prep and healthier protein-packed dinners!

When I first went vegan, I really did not like lentils at all! It was a texture thing, something was just not right.

But over the years, I learned how to properly cook and season them and use them to make so many various meat replacements and now I couldn’t imagine not having them in my diet! They’re so versatile and very budget friendly.

For this recipe I used pre-cooked and cooled lentils and black beans. I almost always have a jar of both in the freezer for easy, quick dinners!

If you’re short on time, you can buy pre-cooked lentils at most grocery stores, but cooking at home is far cheaper and very easy! I love making my lentils in the rice cooker on the sauté function, but you can make them on the stove top, too.

If you’ve never cooked lentils before, it is very similar to the way you would cook rice. Check out this article: How to Cook Lentils. It will teach you how to make lentils on the stove top and provides some good information about lentils in general!

Just remember to prep and cool the lentils and beans ahead of time because if they are hot, they will turn to mush in your stuffed peppers!

The sauce for the lentils and beans is also very simple!

Then pour that sauce over the lentils, beans and sautéed red onion in your favorite skillet! Lastly, throw in the corn and cook until warmed through.

You don’t want to over cook this mixture because remember – it is going to cook even more in the oven! And we want our lentils and beans to stay intact.

If you know me, it’s no secret I love Chipotle. It’s one of the best places to eat out as a vegan and they fill up the burrito bowls so much it usually ends up being two meals for me!

And although I desperately think Chipotle needs to add my Cashew Sour Cream recipe to their menu, I have absolutely no complaints about the cilantro lime white rice. It is perfection.

So buttery, flavorful and you can really taste the lime!

And the great thing? Making this rice at home is pretty easy! A few key tips to good rice at home:

This filling is good for stuffing about 6 large peppers.

Now for this recipe, I used green peppers, but use what ever color you want. Green are the most bitter peppers, so if you’re looking for something a little more sweet – go for orange or red!

Cut the tops off the peppers and scoop out the seeds and ribs.

Then toss the lentil/bean mixture with the rice until fully combined.

Stuff the peppers with the mixture, then, completely optional – sprinkle with vegan cheese.

Then put the peppers in either a 9×13 casserole dish or a large oven safe cocotte with about a cup water to help them steam. I used my 6 qt Staub Cocotte and they fit in perfectly. I prefer the cocotte because I can avoid using tin foil and feel great about limiting my waste!

Tip: Cashew sour cream is delicious mixed with the chili in adobo sauce. Trust me.

I hope you guys give these a try! I don’t know what it is but eating stuffed peppers is so much more fun than just eating the stuffing with sautéed peppers! It also feels so perfect for Fall and may I suggest, a Halloween party?

If you like this recipe or have any questions, leave me a comment down below. I respond to all comments! You can also pin this recipe for later and can connect with me on Instagram! 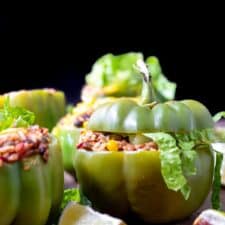 **Make sure to prepare your green lentils and black beans ahead of time so they are cooked and cooled prior to making this recipe!