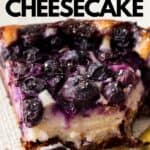 This Vegan Blueberry Cheesecake is the easiest baked vegan cheesecake of your dreams! It’s made with a soft, buttery homemade crust (no graham crackers!) and is packed full of fresh blueberries. This rich, creamy cheesecake is guaranteed to be a hit!

What is baked vegan cheesecake made of?

How to Make Vegan Cheesecake Bars

Can you freeze baked vegan cheesecake?

Yes, this vegan blueberry cheesecake freezes well. To freeze, follow all instructions, including setting in the refrigerator for 4 hours. Once cool, transfer the cheesecake to a cardboard round and wrap tightly with a couple layers of saran wrap. Make sure the cheesecake is completely covered to prevent freezer burn. Store in the freezer for up to 3 months. Thaw completely in the refrigerator before slicing and enjoying.

How long is baked vegan cheesecake good for?

This vegan cheesecake will last in the refrigerator for up to 5 days. Freeze for longer storage.

Where can I buy vegan cheesecake?

I If you are short on time and need to buy a vegan cheesecake, there are a few brands you can find in most freezer aisles. I like the Daiya vegan cheesecakes and find them most widely available in larger grocery store chains. 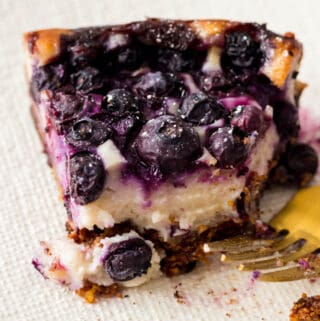 This Vegan Blueberry Cheesecake is the easiest baked vegan cheesecake of your dreams! It's made with a soft, buttery homemade crust (no graham crackers!) and is packed full of fresh blueberries. This rich, creamy cheesecake is guaranteed to be a hit!
5 from 2 votes
Prep Time: 20 minutes
Cook Time: 1 hour 5 minutes
Total Time: 5 hours 25 minutes
Servings: 8 slices
Print Recipe Pin Recipe Rate this Recipe

This recipe was originally published June 9, 2020 and has been republished on August 18, 2022 to include new photos, FAQs, step by step photos and more. The original recipe has been tweaked slightly for improvements. Recipe is adapted from America’s Test Kitchen and Minimalist Baker.