This roasted chili-corn salsa is a copycat version of the corn salsa served at Chipotle Mexican Grill! Sweet corn, charred poblano peppers, cilantro, red onion, and a healthy squeeze of lime juice are key flavors in preparing this new family favorite. It’s the perfect balance of sweet, salty, and tangy and ready in 25 minutes!

I love all the salsas (have you tried my 5 Minute Tomatillo Green-Chili Salsa (Chipotle Copycat)?) at Chipotle, but the corn salsa is my favorite!

I don’t often find corn salsa on the menu at other restaurants, but this salsa is great because it is not nearly as salty as the other options and it’s naturally vegan and gluten free.

Many store-bought and restaurant quality salsas are loaded with sodium – not this one. And a big perk of making it at home yourself is you could make it completely salt free.

TABLE OF CONTENTS show
1 Why This Recipe Works
2 Ingredient Notes and Substitutions
3 Step by Step Instructions
4 Preparing the Salsa
5 Frequently Asked Questions
6 Tips for Making the Best At Home Salsa
7 What to Serve This Salsa With?
8 Roasted Chili-Corn Salsa (Chipotle Copycat!)

Why This Recipe Works

As indicated before, I roasted my own poblano peppers in creating this recipe, however if you are short on time, don’t have an oven or gas range and want something quick and easy, use canned whole poblano peppers.

I often see these at my local Mexican grocer or you may find them in the International aisle of a larger grocery store chains.

How to Roast Poblano Peppers at Home

There are 3 main ways to do this at home:

The absolute fastest way to do this is directly on the stove over an open flame, but this is also the most dangerous and an easy way to burn yourself as peppers are known to pop and smoke as the skin starts to blister.

If you’re comfortable, feel free to do it this way. Here is a visual guide to roasting peppers on the stovetop to help you.

In this post, I am going to show you how to char the poblanos under the broiler. It can get just as nice of a char on the peppers.

Once your peppers are roasted and diced, preparing the rest of the salsa is an absolute breeze.

Is roasted chili corn salsa meant to be served warm or cold?

This salsa is meant to be served cold!

No, this is not their official recipe, it is simply inspired by it! I did see, however, after creating this recipe that Chipotle shared their official corn salsa recipe on their Tiktok account last year. In comparing the recipes, my version is quite close!

Is this salsa spicy?

No, the chili corn salsa at Chipotle is one of their mildest salsas. You can make it even more mild at home by omitting the diced jalapeño.

I don’t have kosher salt. Can I use regular table salt?

Yes, if you are using regular table salt, I recommend decreasing the amount of salt by half. So start with ½-1 teaspoons of salt.

Tips for Making the Best At Home Salsa

What to Serve This Salsa With?

Other Main Dishes to Try 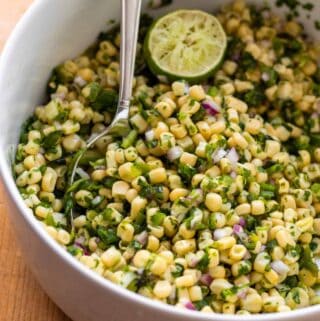