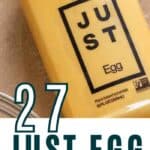 Use up that bottle of JUST Egg with one of these 27 JUST Egg recipe ideas! We’ve got everything from quiche, omelets, breakfast burritos, meatloaf, french toast, creme brûlée, chocolate cake and more! Everything is 100% plant-based, vegan and absolutely delicious! Find a new favorite breakfast, lunch, dinner and dessert today.

What is JUST Egg?

JUST Egg is a liquid vegan egg product founded by Josh Tetrick back in 2011. The main ingredient in JUST Egg is mung bean protein isolate. Mung beans are a type of legume (similar to lentils, chickpeas, and soybeans!).

They are small, green in color and pack some great health benefits – they’re high in protein, a good source of fiber, antioxidants, B vitamins and minerals such as folate, manganese, and phosphorus.

In addition to mung beans, JUST Egg is made with non-GMO expeller pressed canola oil and less than 2% of dehydrated onion, preservatives, natural flavors, and coloring from natural carrot extractives.

Yes and no. In my opinion the texture and look of JUST Eggs once scrambled is very similar to regular egg scrambles made with the egg yolks. It’s yellow in color, a great texture, and really scrambles up well! If you can’t get on board with the texture of Silken Tofu Scrambled Eggs just yet, I think you may really enjoy the texture of JUST Eggs.

Where I think JUST Egg differs from real eggs is in the taste. JUST Egg is much more mild tasting – it’s missing that classic sulphur taste you’d get with eggs. Luckily, there’s an easy solution to this! Sprinkle about ¼-1/2 teaspoon of Kala Namak or black salt on your JUST Eggs right before eating and I think you’ll find it tastes VERY much like eggs.

Where to buy JUST Egg

Since its inception in 2011, JUST Egg has come a long way and is now widely available in large supermarkets and grocery stores such as Walmart, Target, Aldi, Safeway, Whole Foods Market, and more.

To find JUST Egg near you, use their Product Finder to find the location closest to you. Or, buy JUST Egg online and have it delivered right to your door.

When shopping for JUST Egg in stores, the liquid JUST Egg will be found near the regular eggs or pre-bottled egg whites. If shopping for the JUST Egg folded patties, check the freezer aisle.

How Long Will a Bottle of JUST Egg Last?

Once opened, a bottle of JUST Egg will spoil rather quickly (this is a good thing!). Plan to use JUST Egg within about 4 days of opening. In my experience – this is not difficult to do. Most times I use JUST Egg personally, I end up either cooking all of it in one sitting or use it up in two days back to back.

Most bottles also have a “best by” date to help you know how quickly you should plan on using it.

In my experience, JUST Egg has a tendency to stick to pans, especially when cooking omelets or vegan egg scrambles on the stovetop. This is much less of a concern with baked recipes, but I’d recommend lightly greasing the baking dish beforehand.

When making omelets or anything stovetop, definitely go with a nonstick pan. I tend to get a good amount of sticking even when using my well-seasoned cast iron pans with this product.

The best nonstick pan for vegan cooking is Caraway. They’re on the pricier side, but I’ve tested them extensively and when taken care of, they’ll last for years. They’re also so nonstick, I regularly use them for oil-free cooking and the food quite literally slides right out of the pan.

What Can I Use JUST Egg For?

As a general rule of thumb, the JUST Egg product can be used in any recipe where eggs are traditionally used. Don’t limit yourself to just using it at breakfast! You can also use it as a binder in veggie burgers and meatloafs, in corn pudding, in fried rice, Thanksgiving stuffing or dressing, baking cakes, cookies, and more.

Below I’ve rounded up 27 of the BEST Just Egg recipes from amazing vegan recipe developers – breakfast, lunch, dinner and dessert included! Use these recipes as inspiration and get creative in the kitchen. 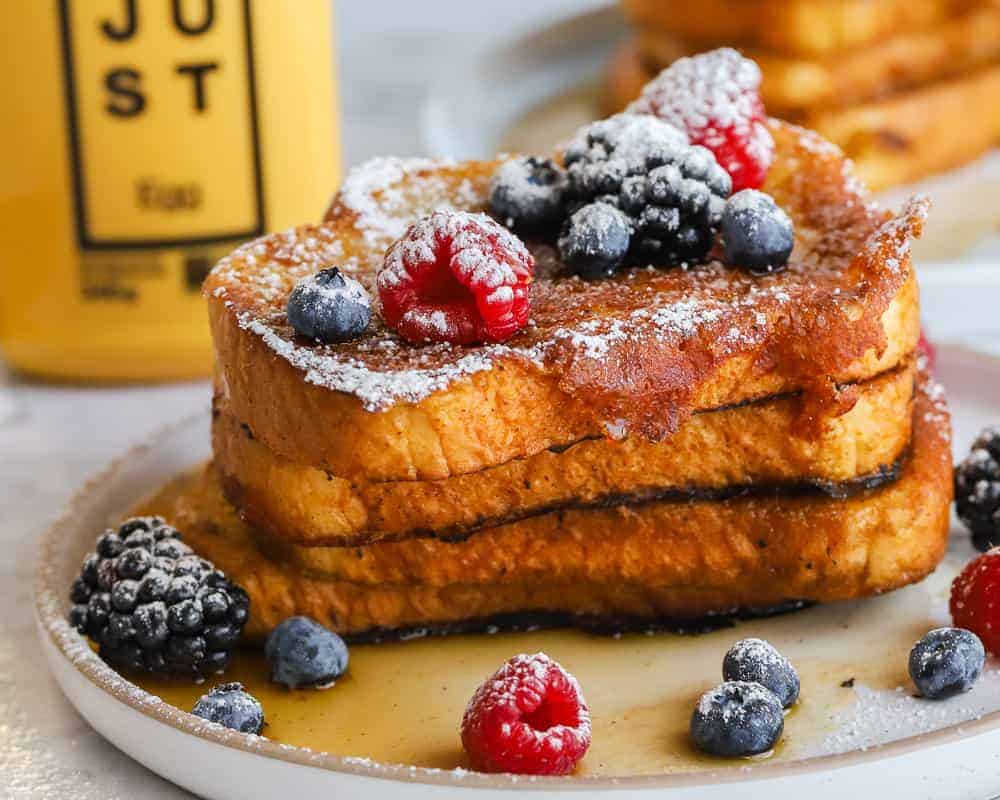 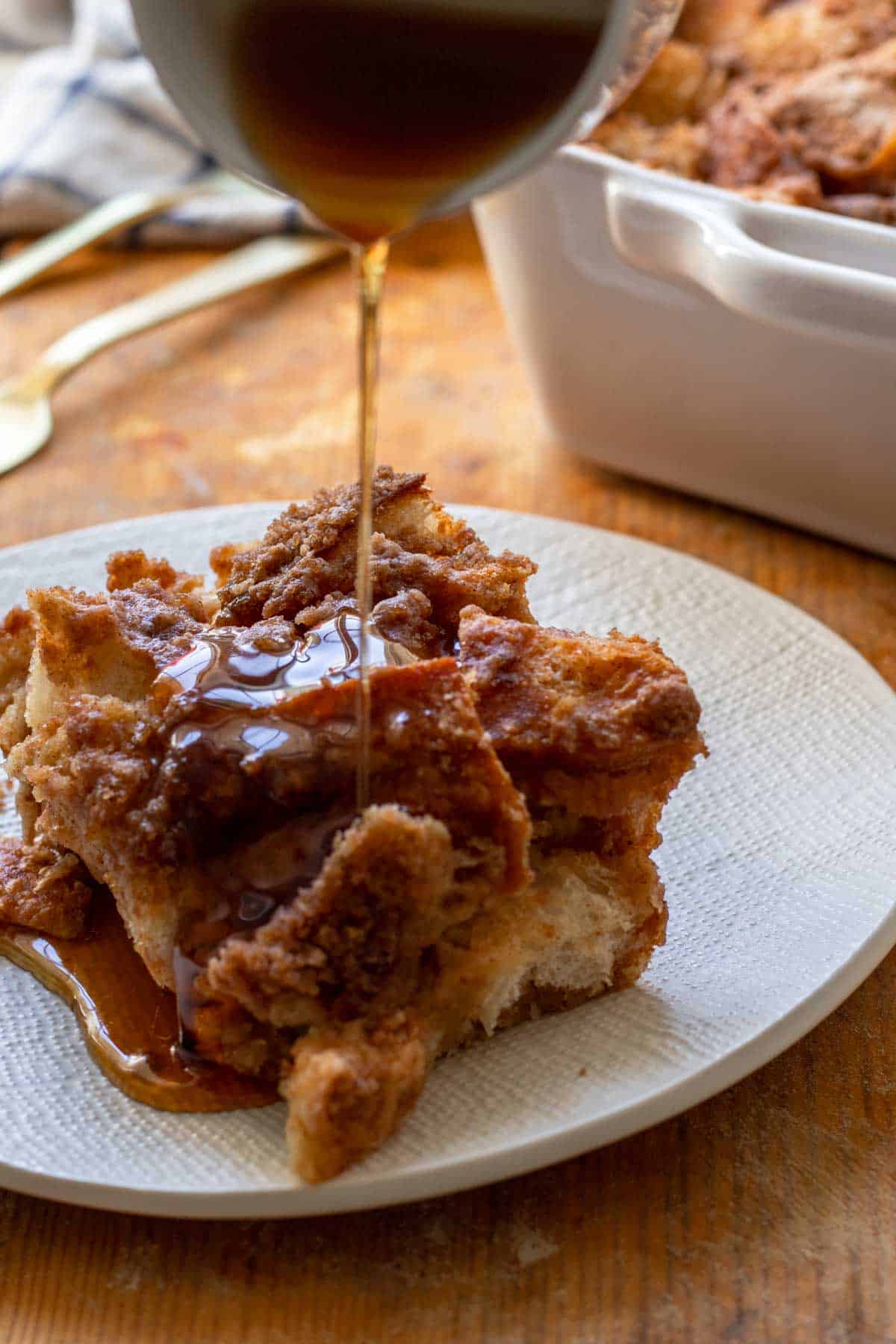 Overnight Vegan French Toast Casserole
Recipe Credit: Nicolette Wax
This overnight vegan french toast casserole is made with Just Egg and just 9 other ingredients. All you need is 10 minutes to prep the night before, and then bake the next morning with a simple brown sugar crumb topping! The best, easy vegan breakfast for holidays and weekends.
Check out this recipe 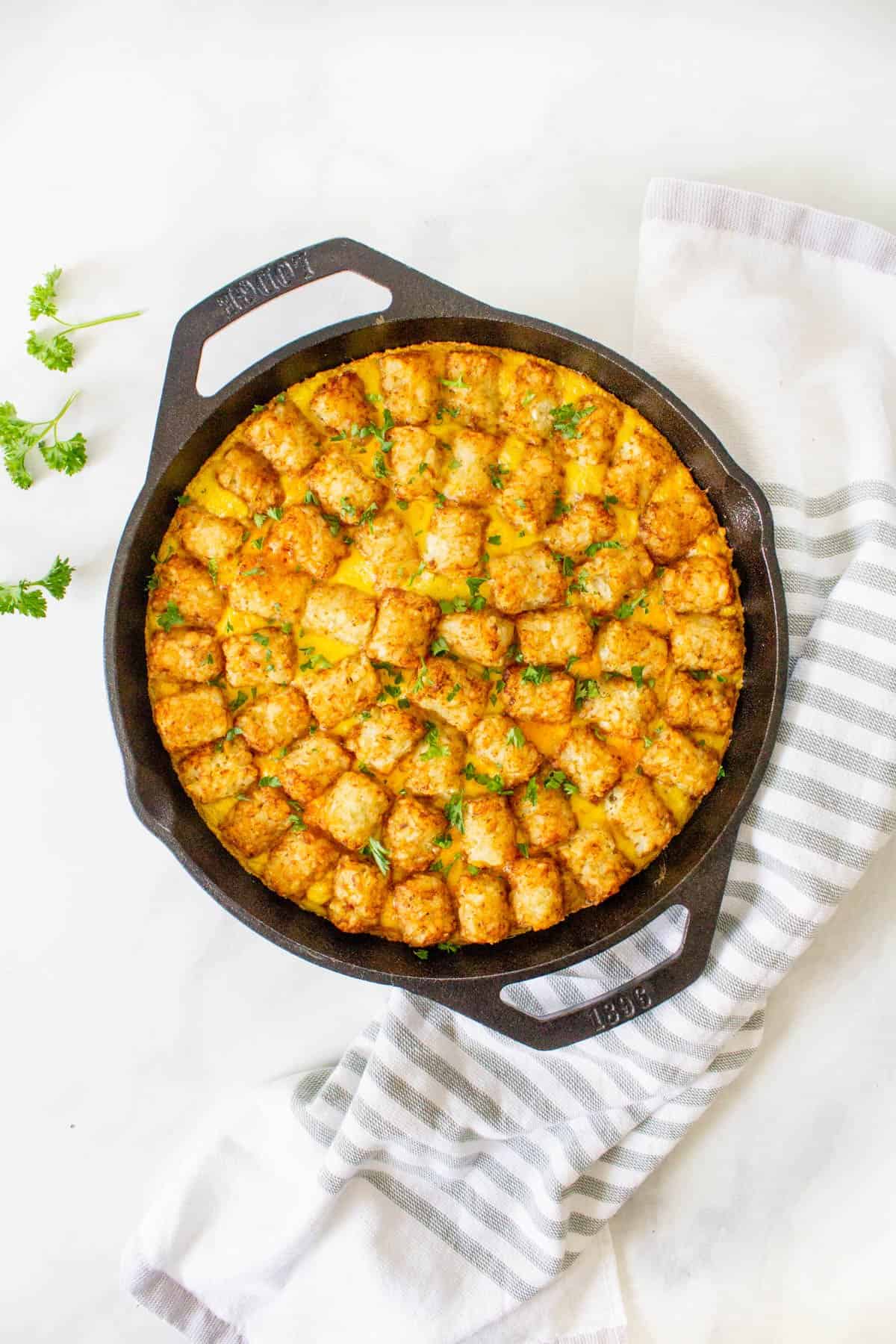 4. Vegan JUST Egg in a Hole

Vegan egg in a hole with Just Egg by Cadry’s Kitchen
Vegan egg in a hole is a delicious and eye-catching breakfast. It takes only minutes to make, but it never fails to impress. Enjoy it any weekday morning, or serve it at brunch.
Check out this recipe 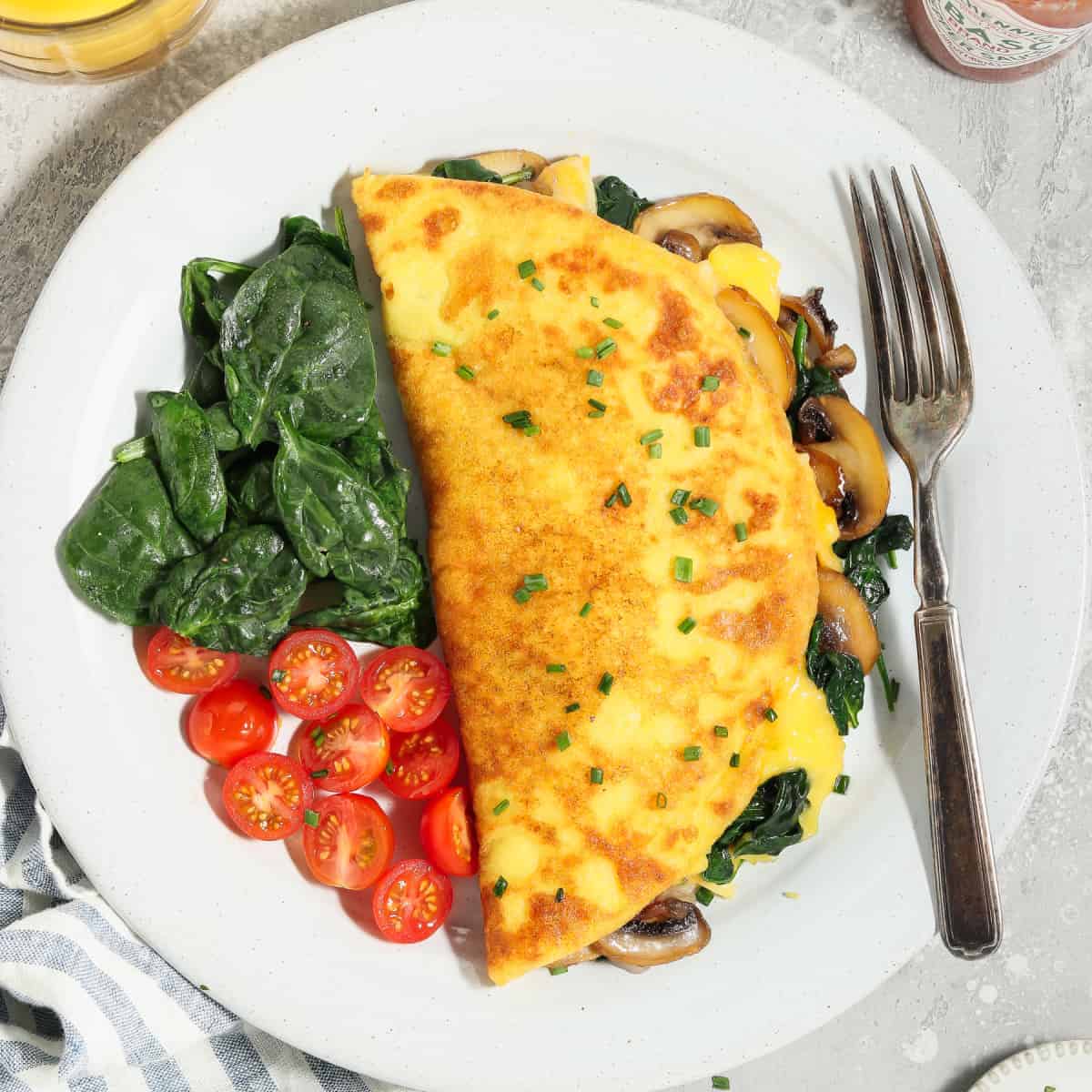 JUST Egg Omelette by Vegan Huggs
A vegan spin on a classic, this JUST Egg Omelette is fluffy, veggie-loaded, and just as good as the original! Plus, it requires minimal prep and takes less than 10 minutes on the stove.
Check out this recipe 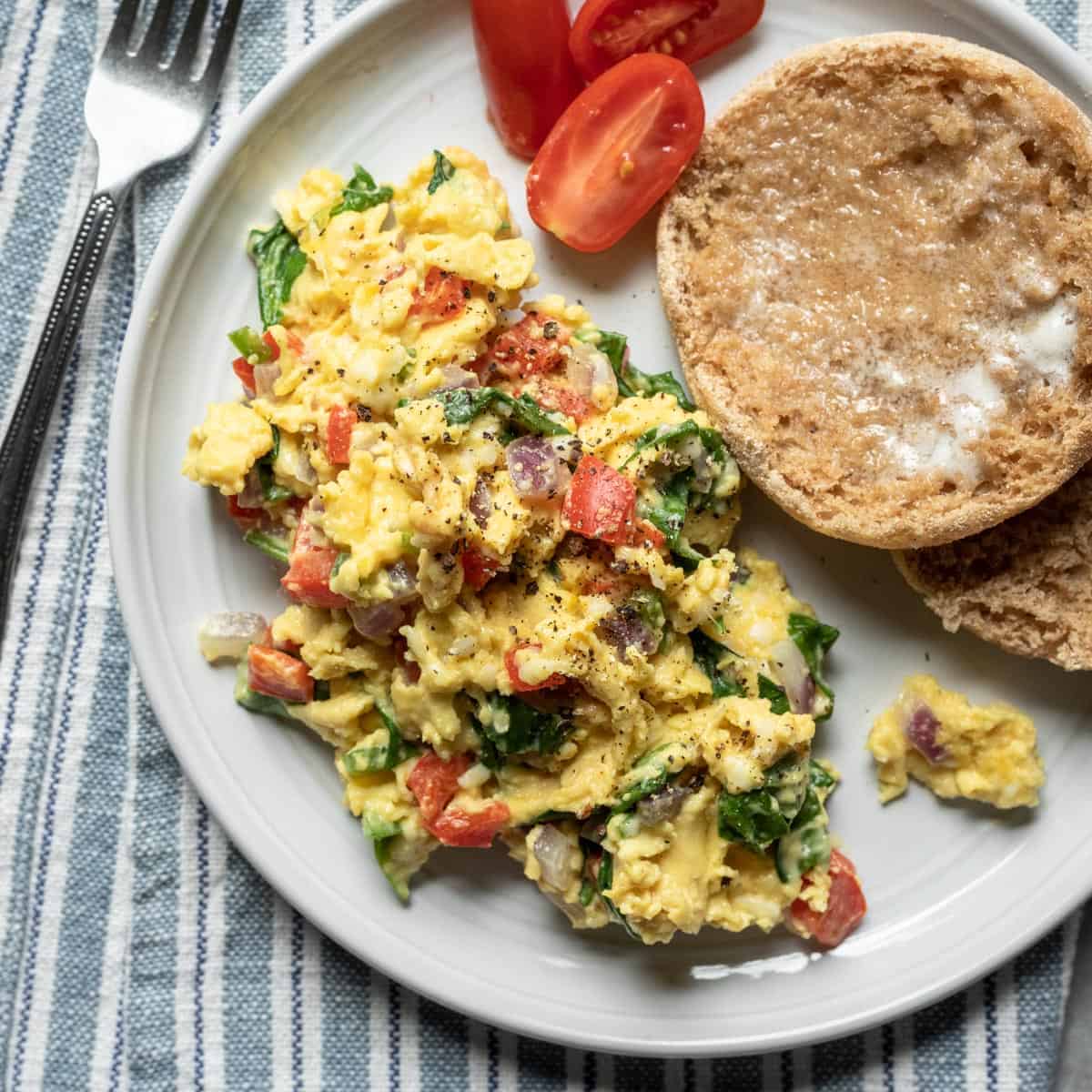 Ultimate JUST Egg Scramble by My Quiet Kitchen
This cheesy, veggie-filled JUST Egg scramble is so quick and delicious any time of day. Serve with your favorite breakfast breads and sides like vegan sausage and fresh fruit.
Check out this recipe 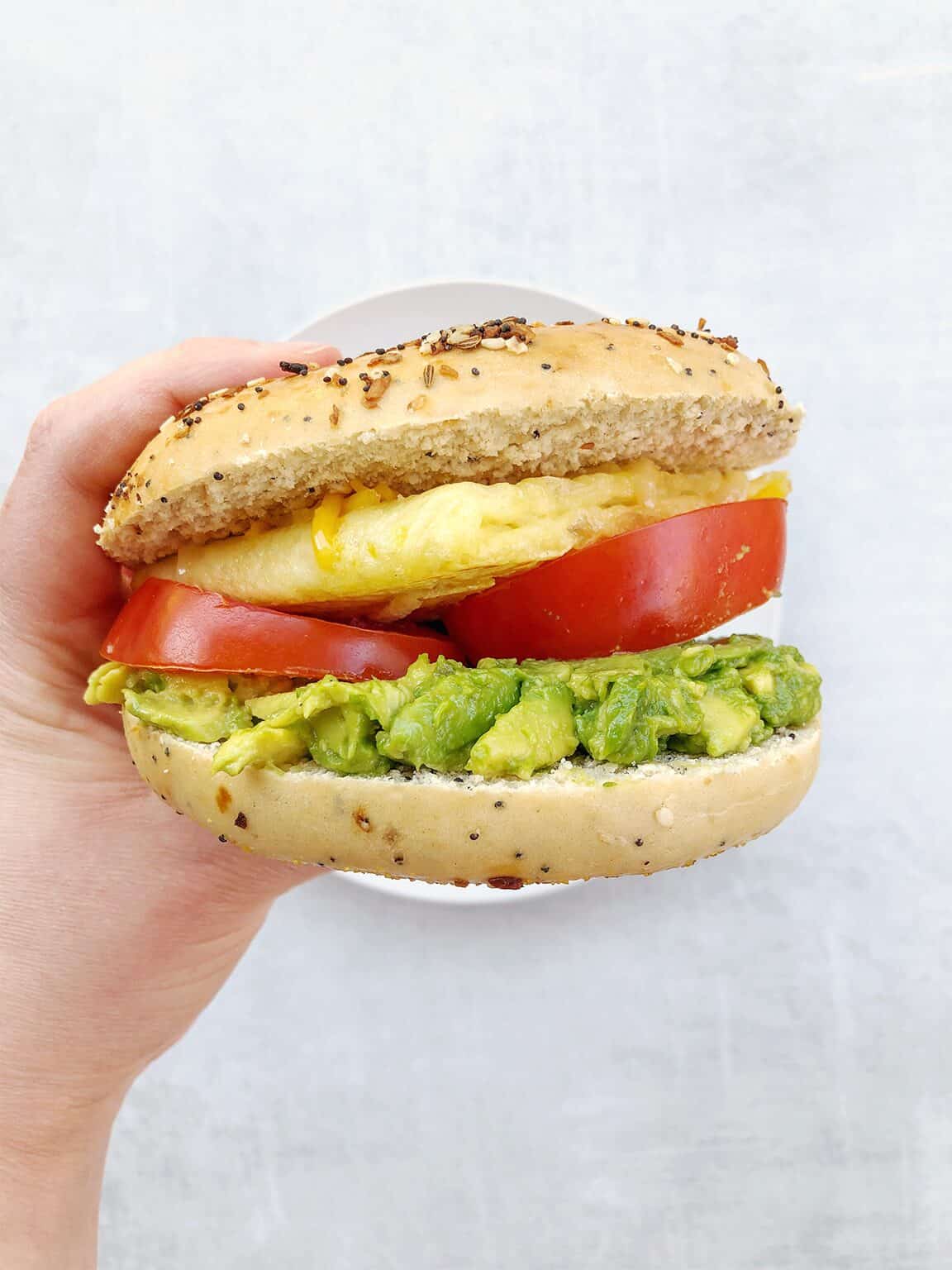 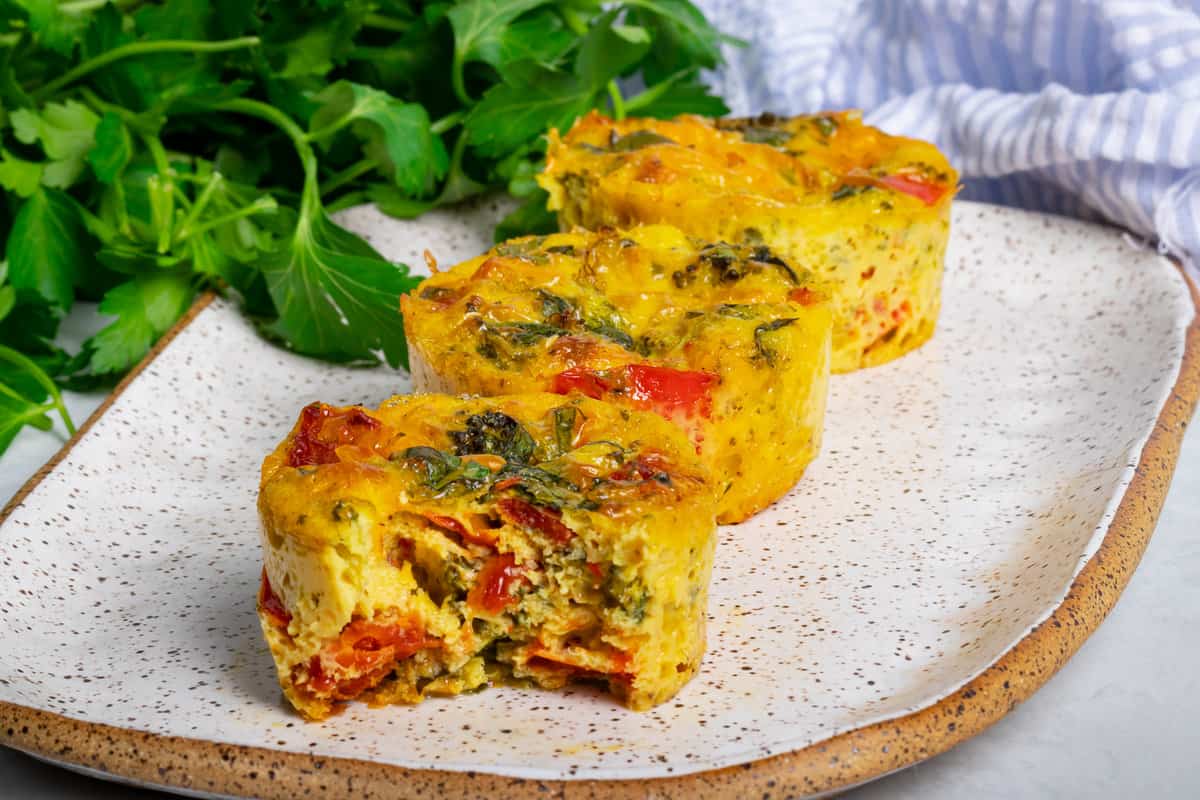 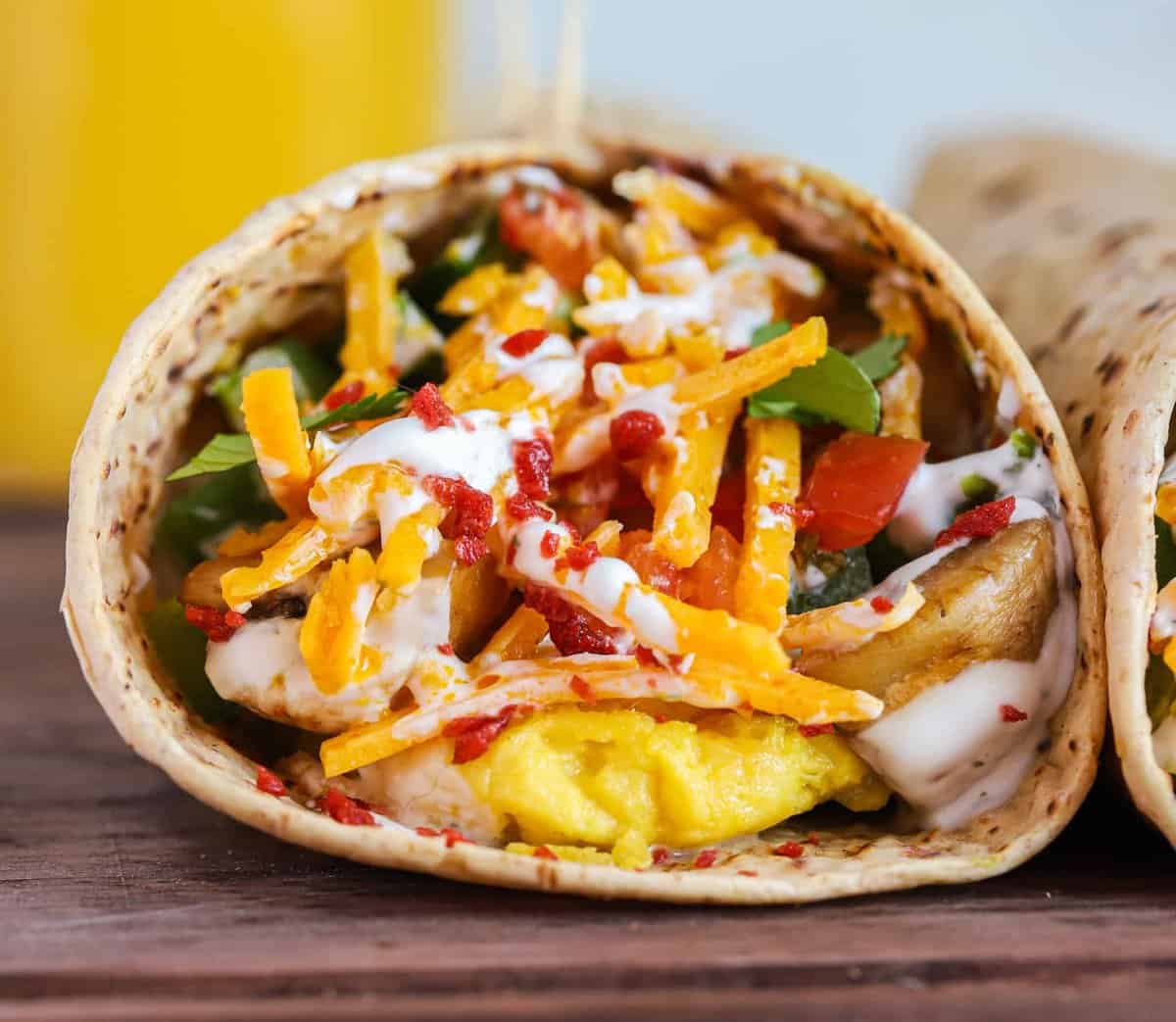 High Protein Vegan Breakfast Burrito by Rescue Dog Kitchen
This high-protein vegan breakfast burrito is the perfect way to start your day! With over 40 grams of plant-based protein and 100% deliciousness, you won’t want to start your day any other way!
Check out this recipe 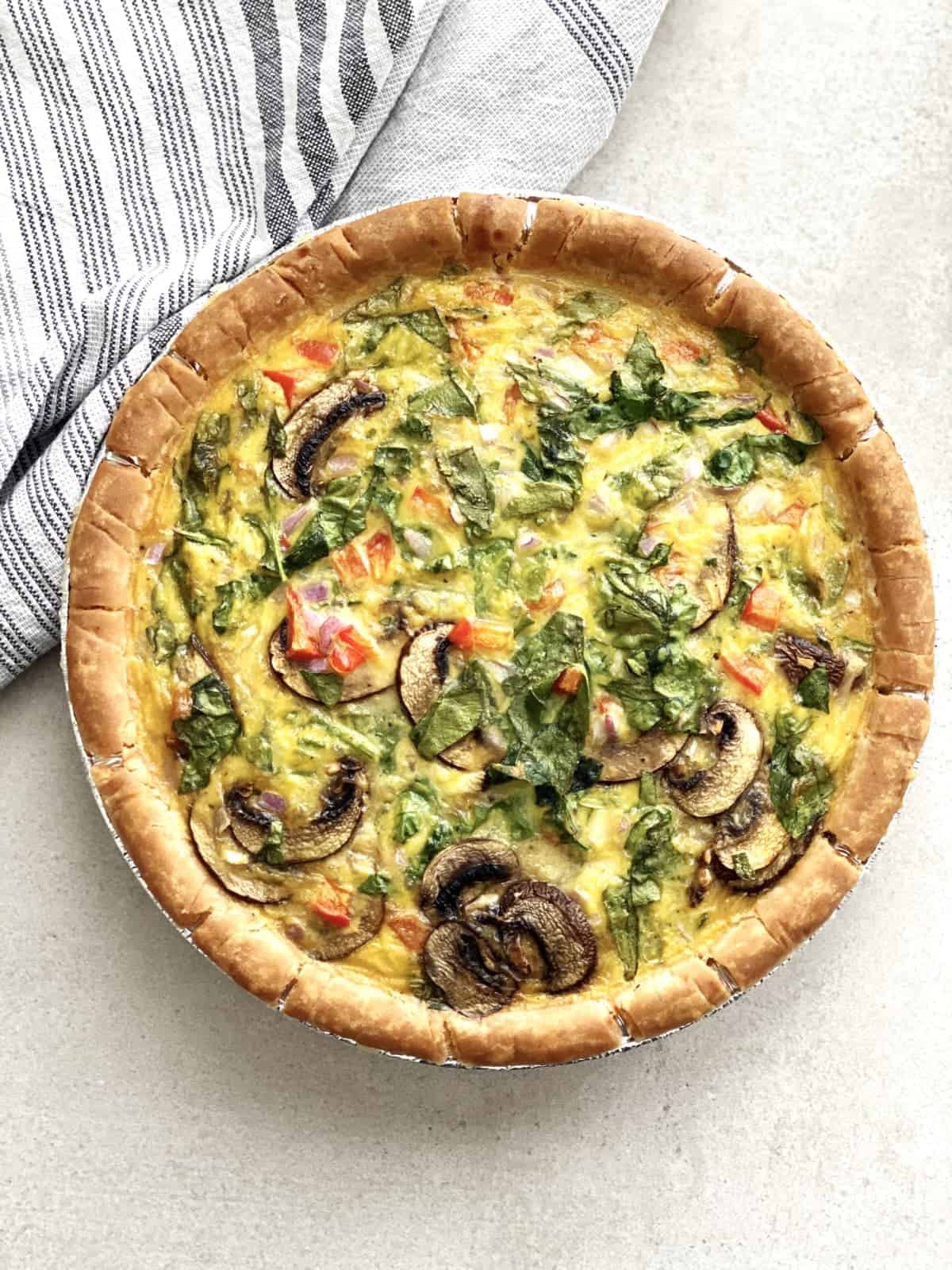 Vegan Gluten-Free Quiche With Just Egg by The Vgn Way
Perfect for breakfast or brunch. This vegan Just Egg quiche baked in a buttery flaky gluten-free crust filled with spinach, mushrooms and ooey gooey vegan cheese. Easy to make and delicious.
Check out this recipe 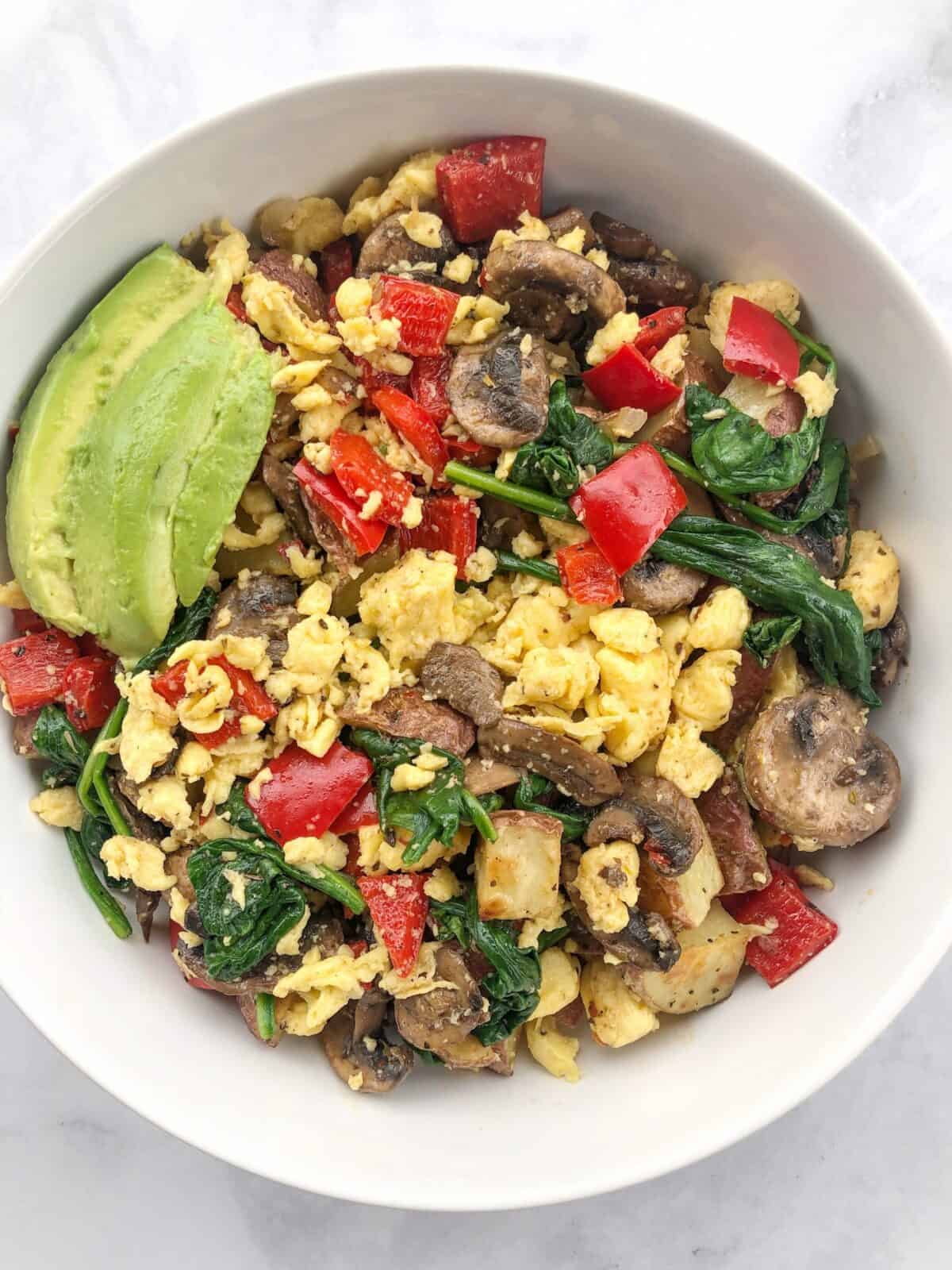 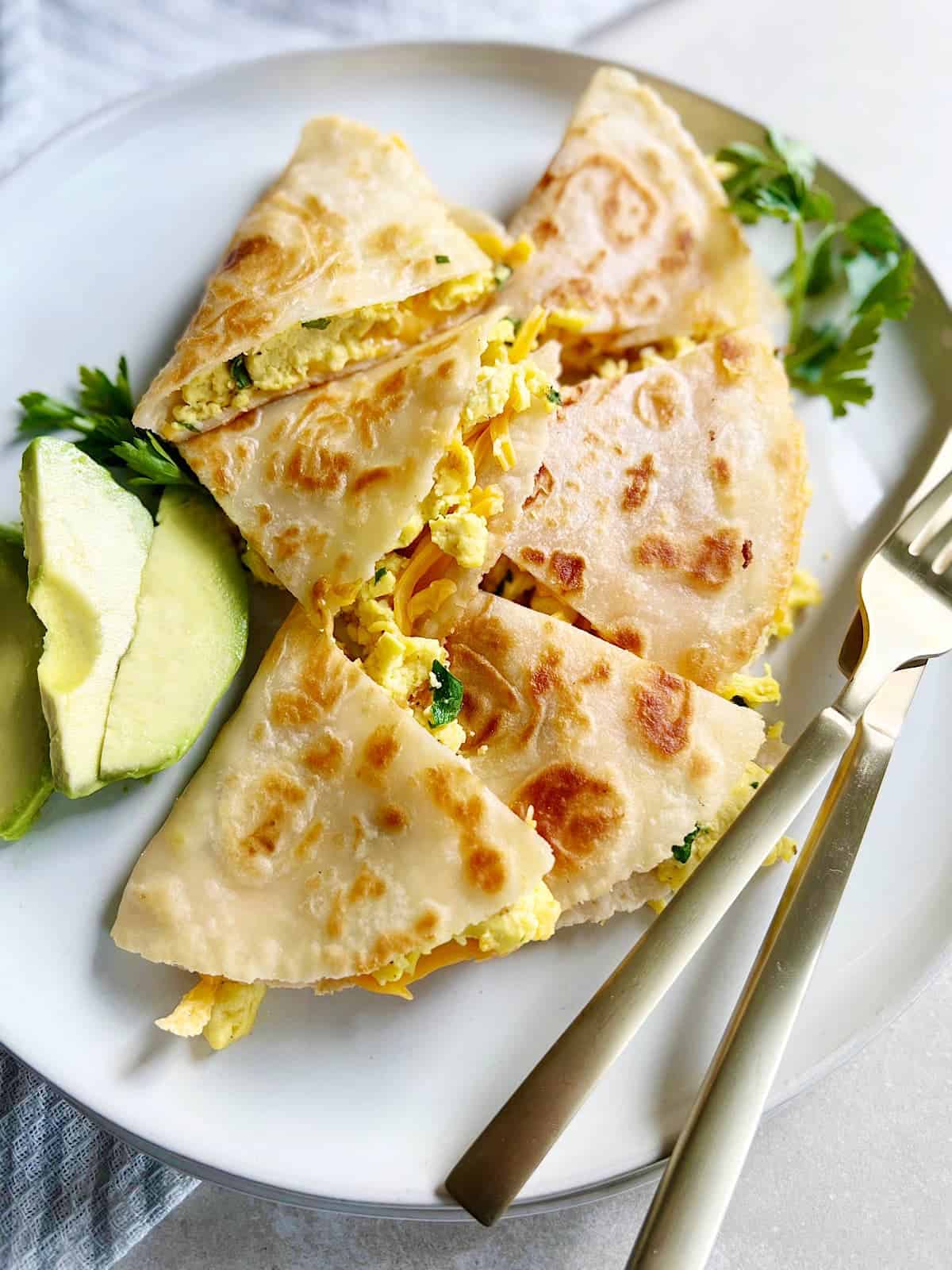 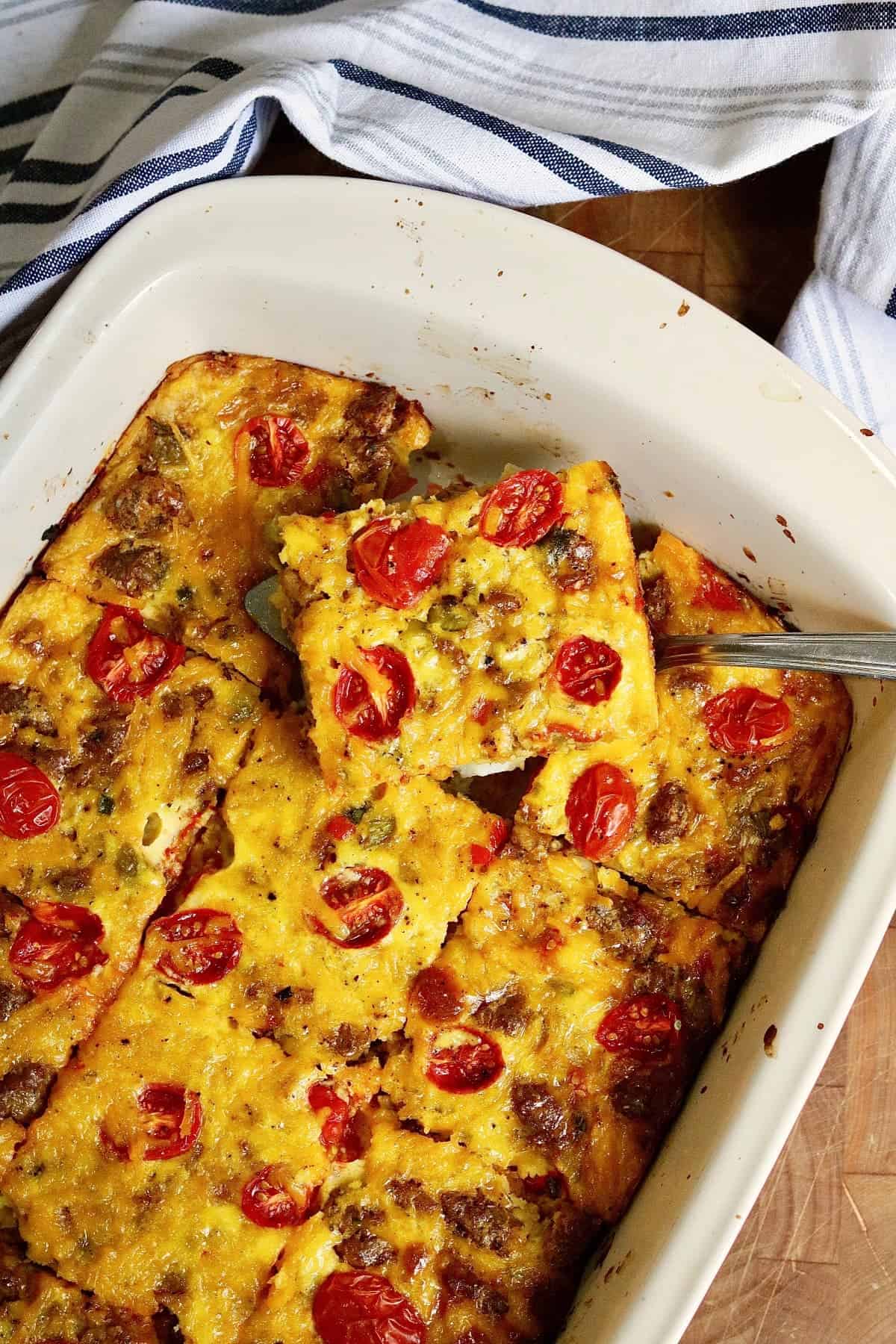 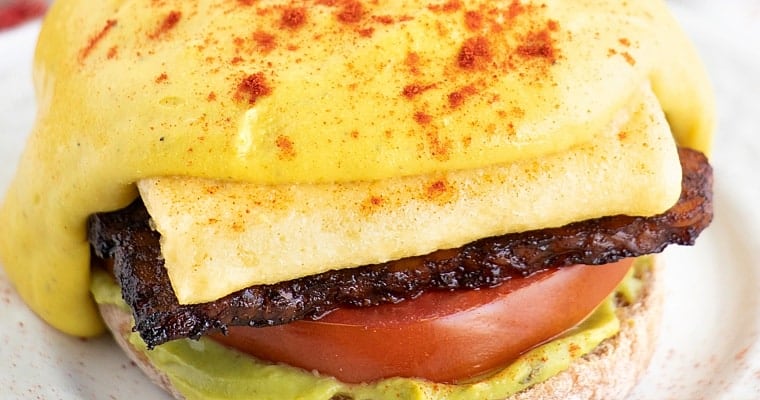 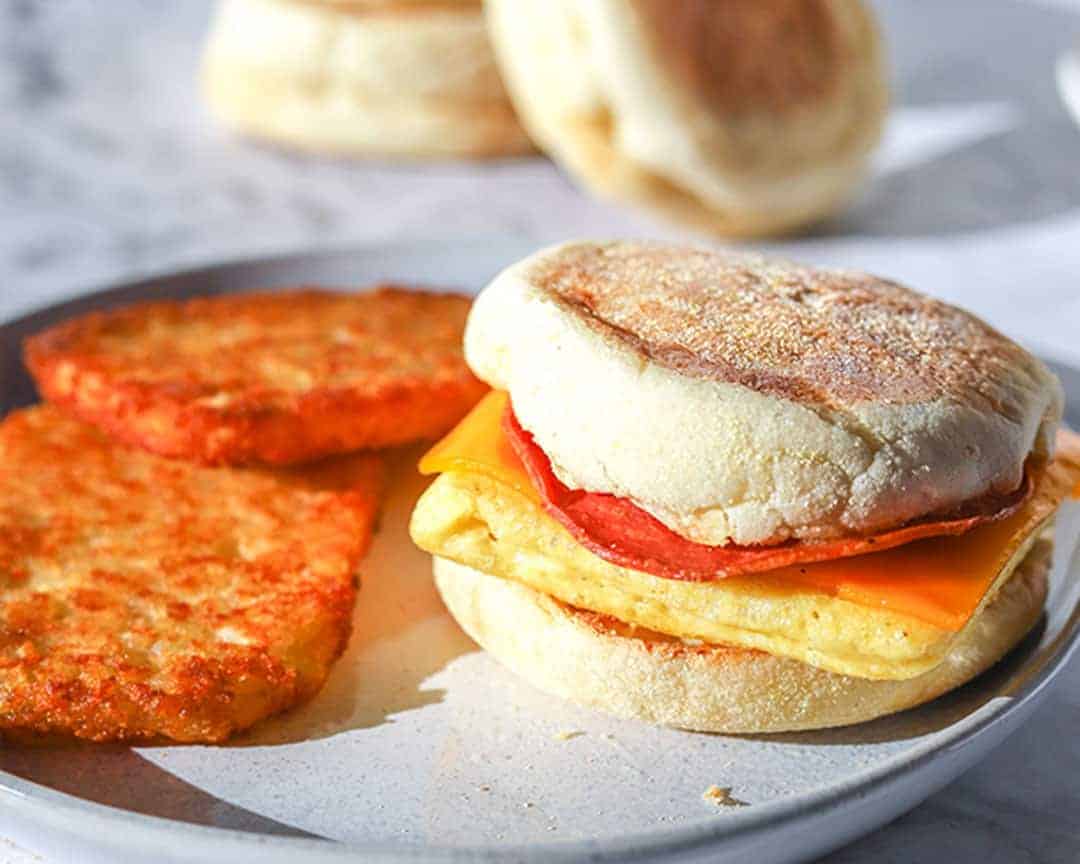 Vegan Egg McMuffins by Rescue Dog Kitchen
These vegan egg mcmuffins are so simple to make! Ready in 6 minutes, 24 g of protein per McMuffin and uses 4 ingredients (JUST egg, english muffins, etc)! They taste just like Mcdonald’s!
Check out this recipe 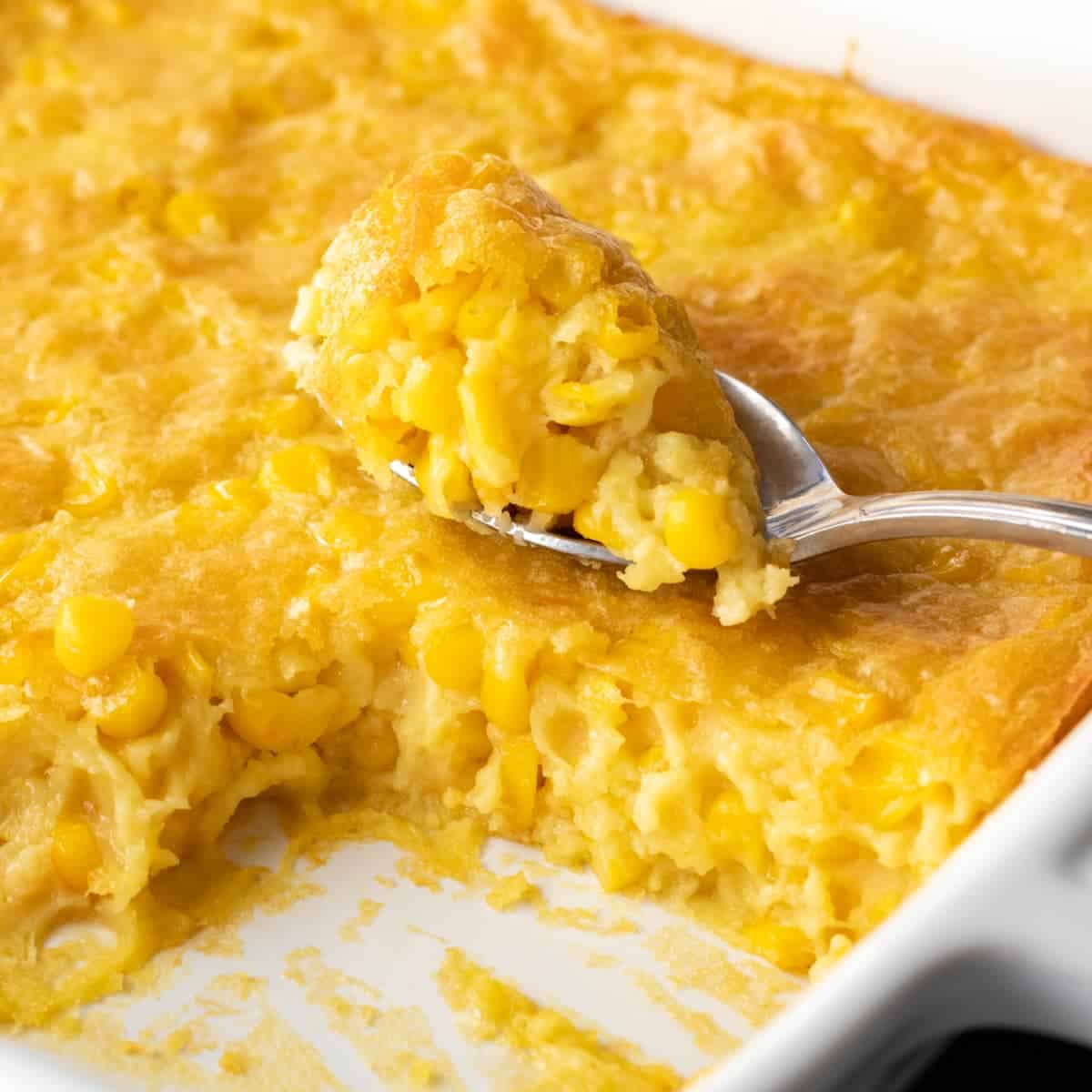 Easy Vegan Corn Pudding by My Quiet Kitchen
Buttery, eggy, sweet, and loaded with corn, this vegan corn pudding is just like Grandmama made except vegan! Only 7 ingredients and so EASY.
Check out this recipe 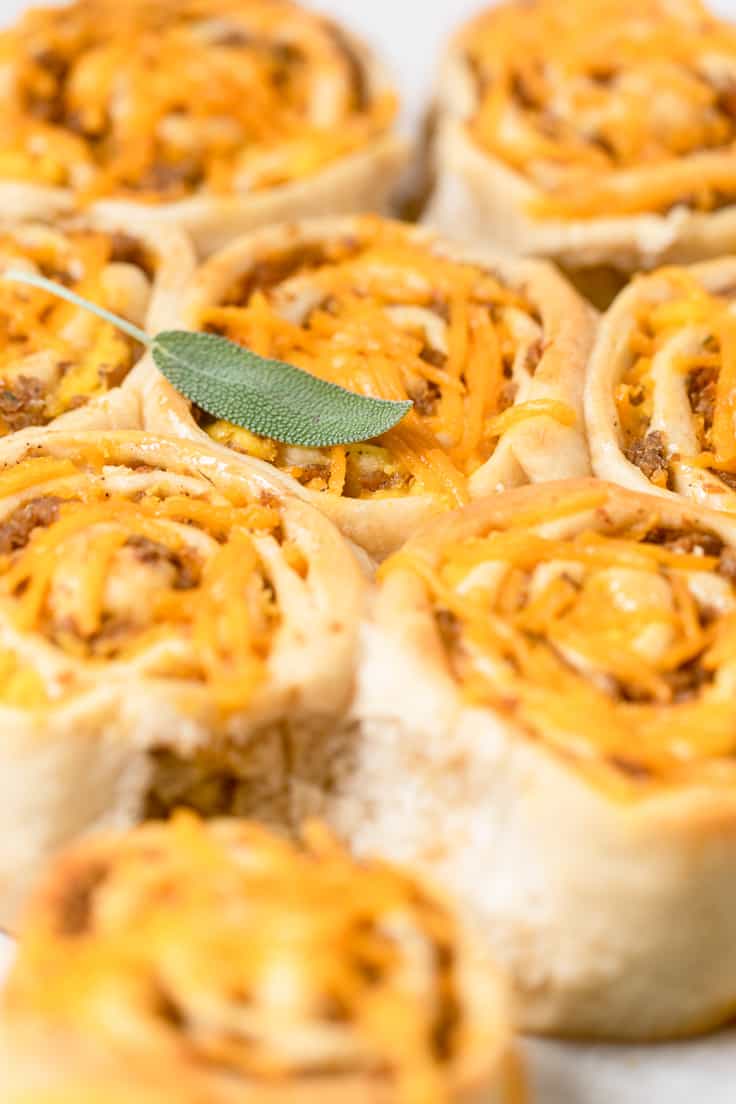 Vegan Sausage Egg & Cheese Rolls by Make it Dairy Free
This vegan sausage egg and cheese rolls are the perfect vegan breakfast rolls in a portable shape making eating on the go easy!
Check out this recipe 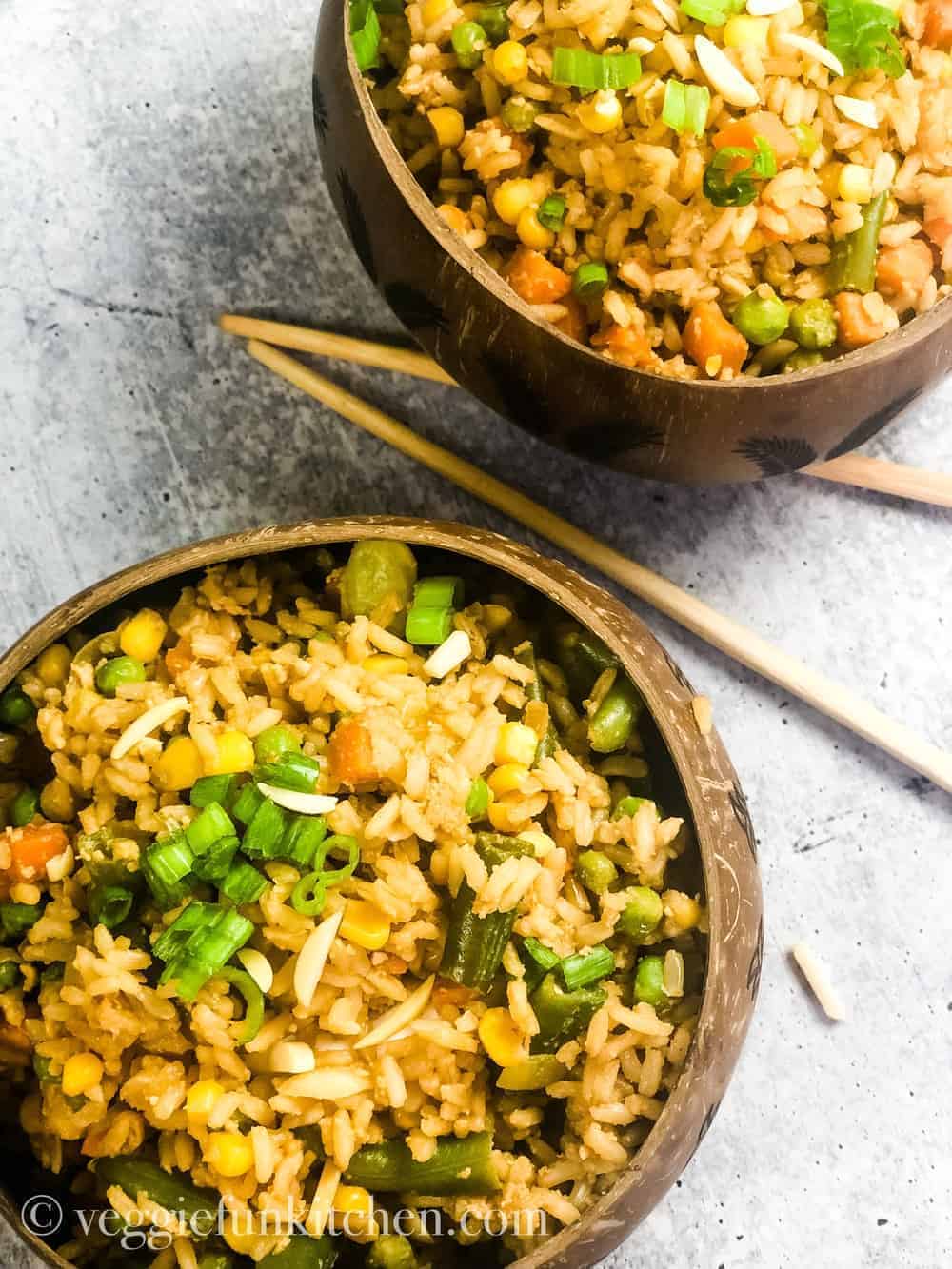 Easy Vegan Fried Rice by Veggie Fun Kitchen
This easy vegan fried rice is quick and easy to make with all the tradional flavors. It uses frozen vegetables and prepared rice with (optional) Just Egg.
Check out this recipe 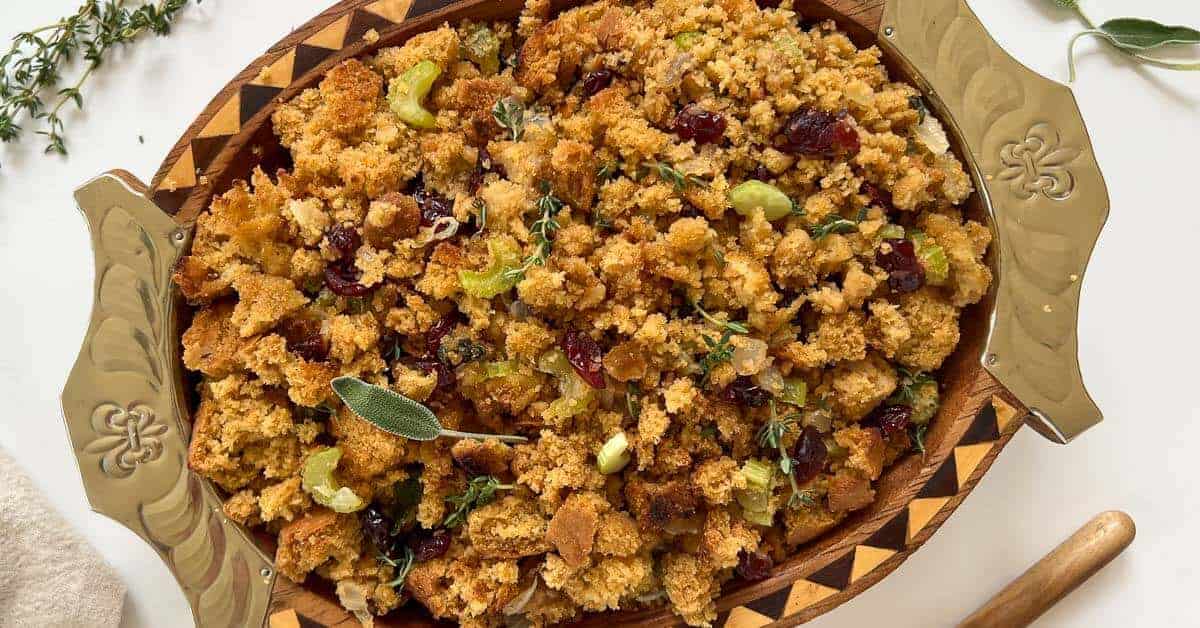 Cornbread Dressing (Cornbread Stuffing) by Our Plant Based World
The best cornbread dressing is made from scratch with homemade gluten-free cornbread and a classic combination of onion, sage, and celery.
Check out this recipe 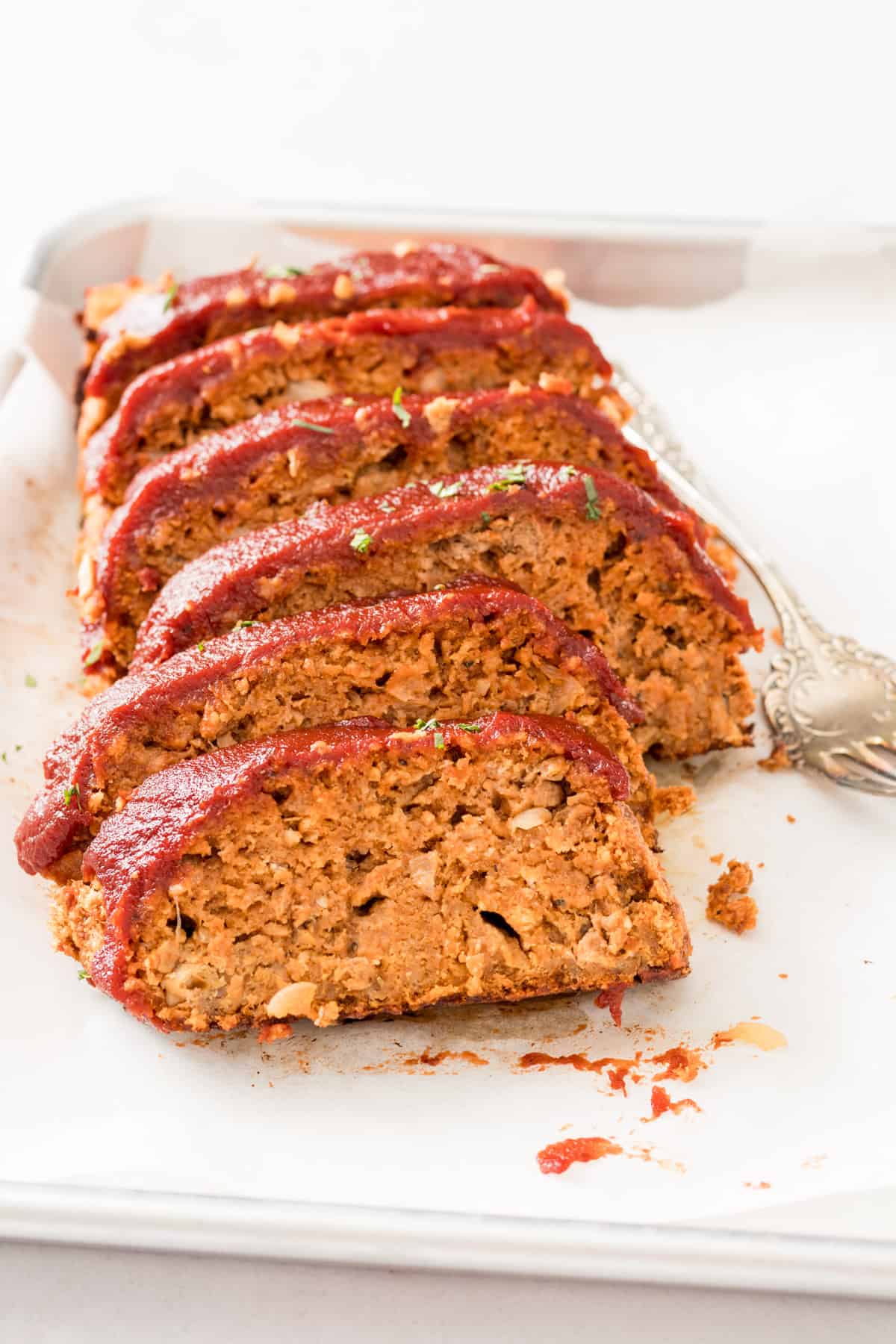 Beyond Meat Meatloaf
Recipe Credit: Nicolette Wax
This vegan Beyond Meat Meatloaf is reminiscent of the classic meatloaf you grew up with! It's made in 1 bowl with 12 simple ingredients and baked with a homemade ketchup on top. Serve with Almond Milk Mashed Potatoes and Instant Pot Vegan Collard Greens for the ultimate vegan comfort food meal!
Check out this recipe 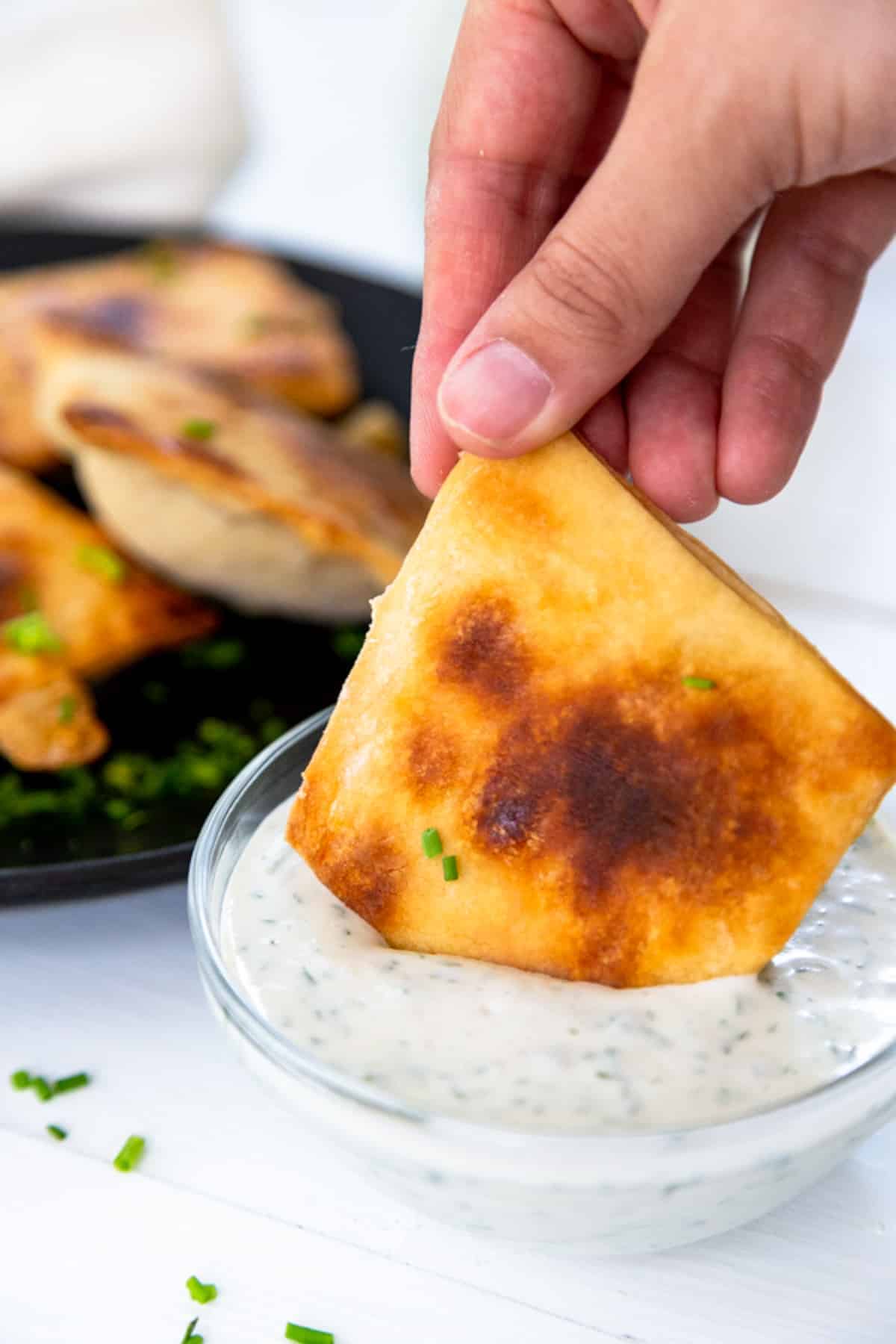 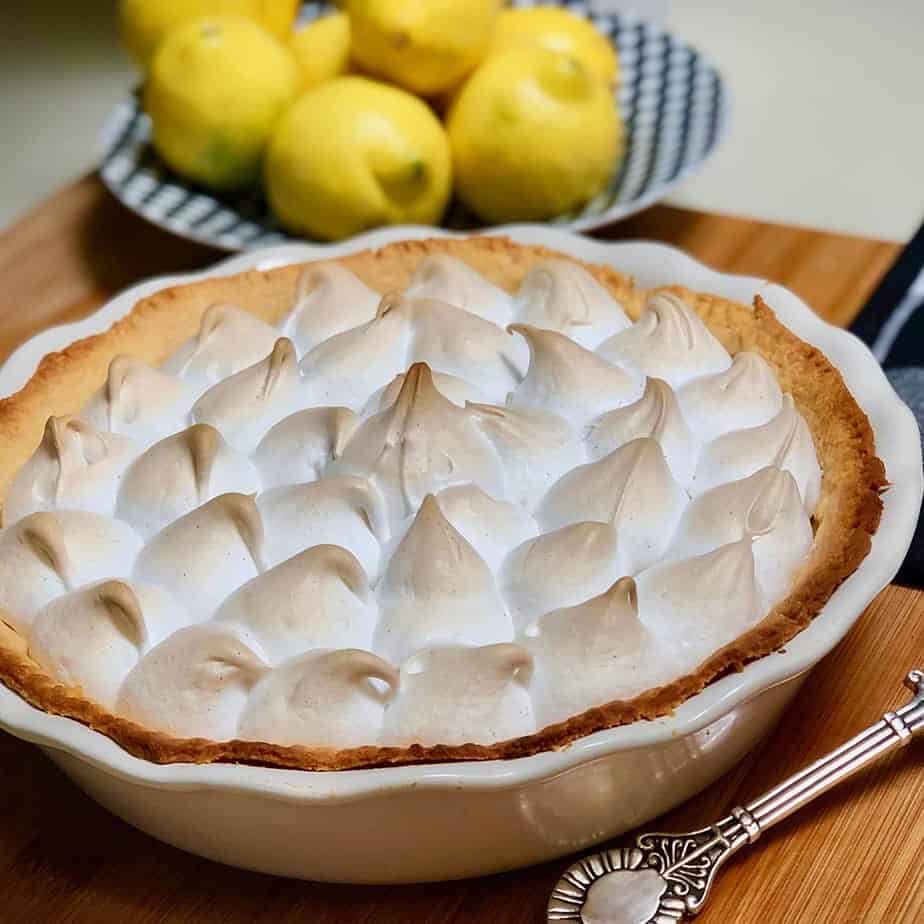 World’s Best Vegan Lemon Meringue Pie by The Carrot Underground
Enjoy the this fabulous pie made with plant-based ingredients, including JUST Egg. The silkiest smooth lemon filling with just the right balance of tart and sweet, topped with mounds of luscious vegan meringue in a golden buttery flaky crust.
Check out this recipe 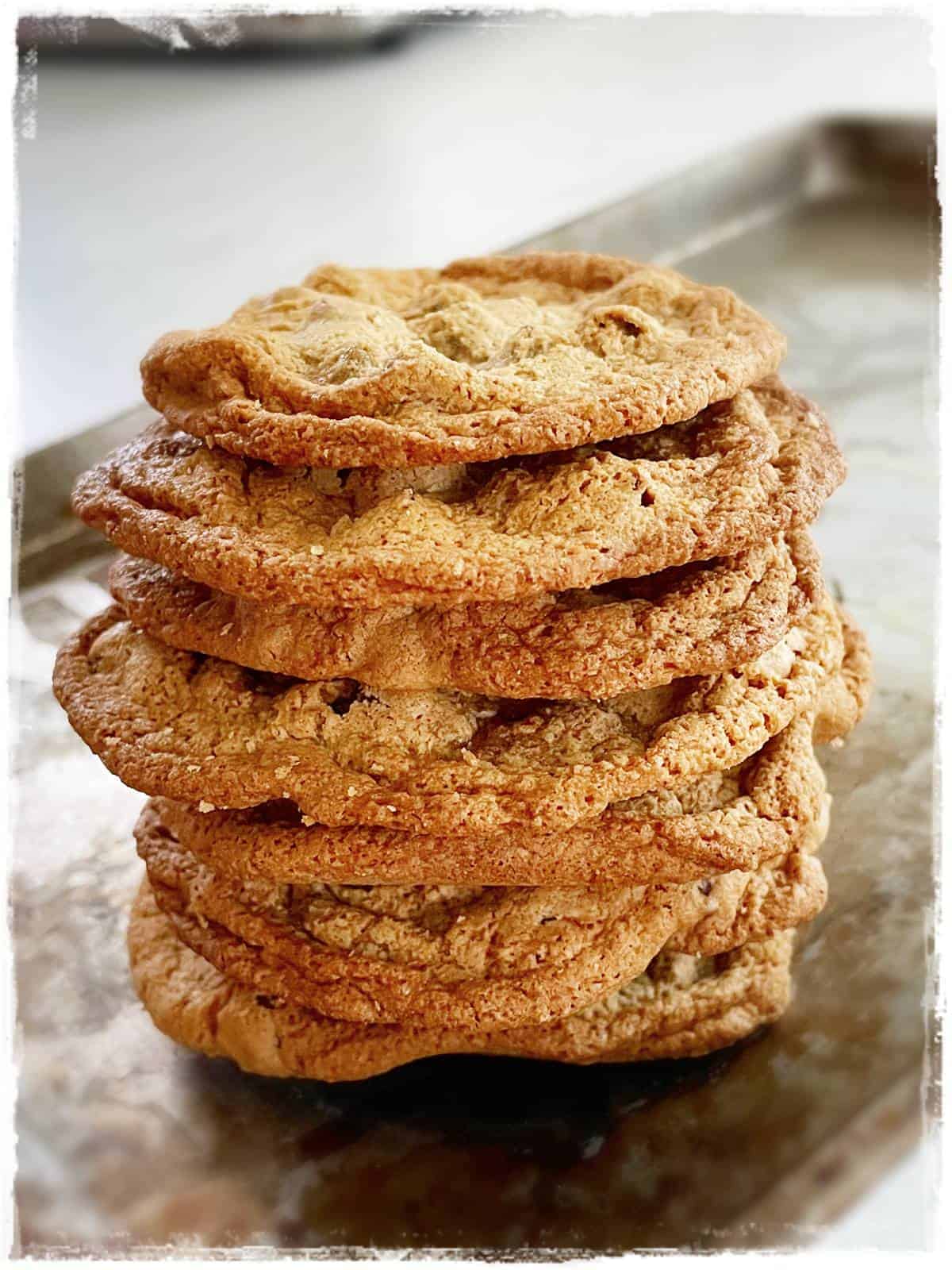 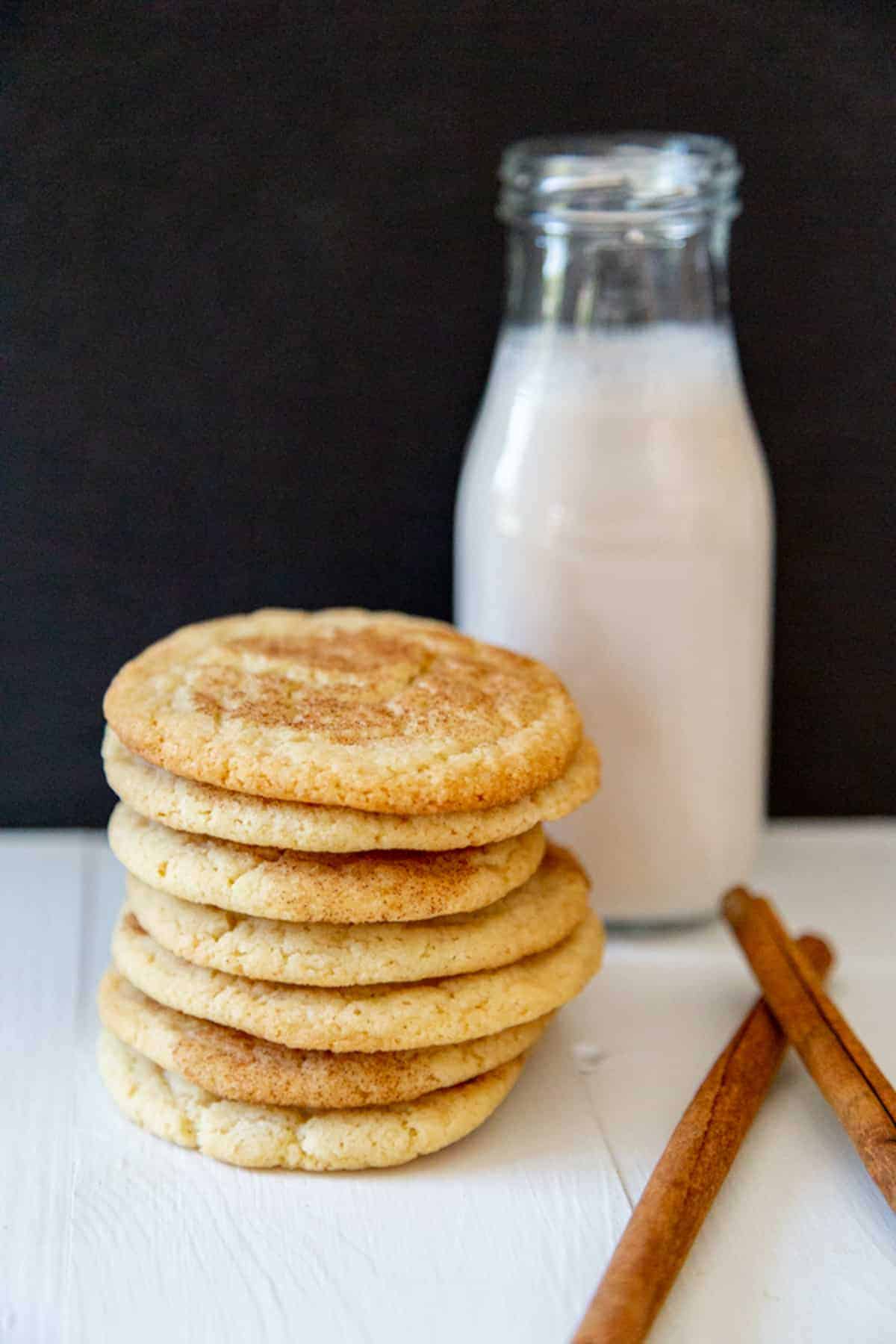 The Best Soft Vegan Snickerdoodle Cookie by Veganosity
This easy soft & puffy snickerdoodle cookie recipe is perfect for any time of year. Dairy-free and eggless thanks to JUST Egg.
Check out this recipe 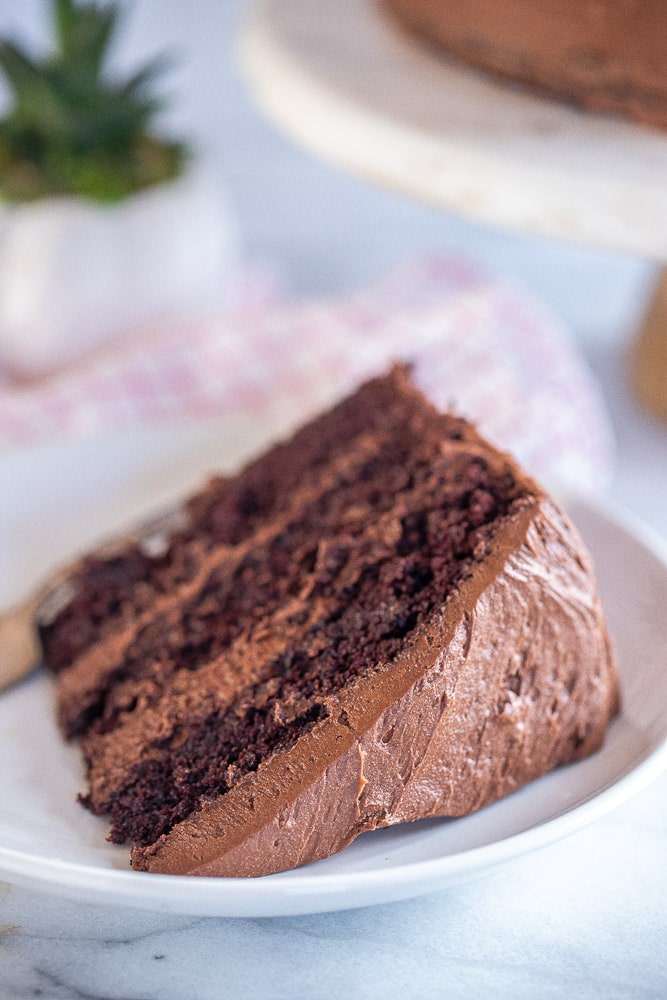 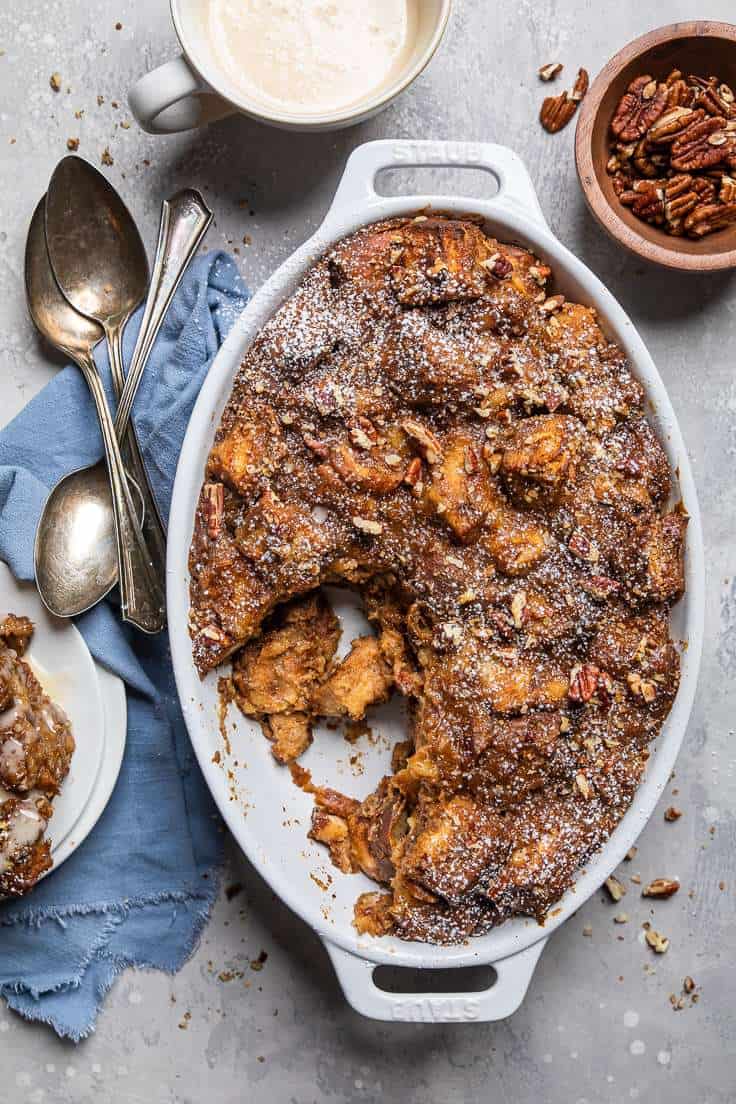 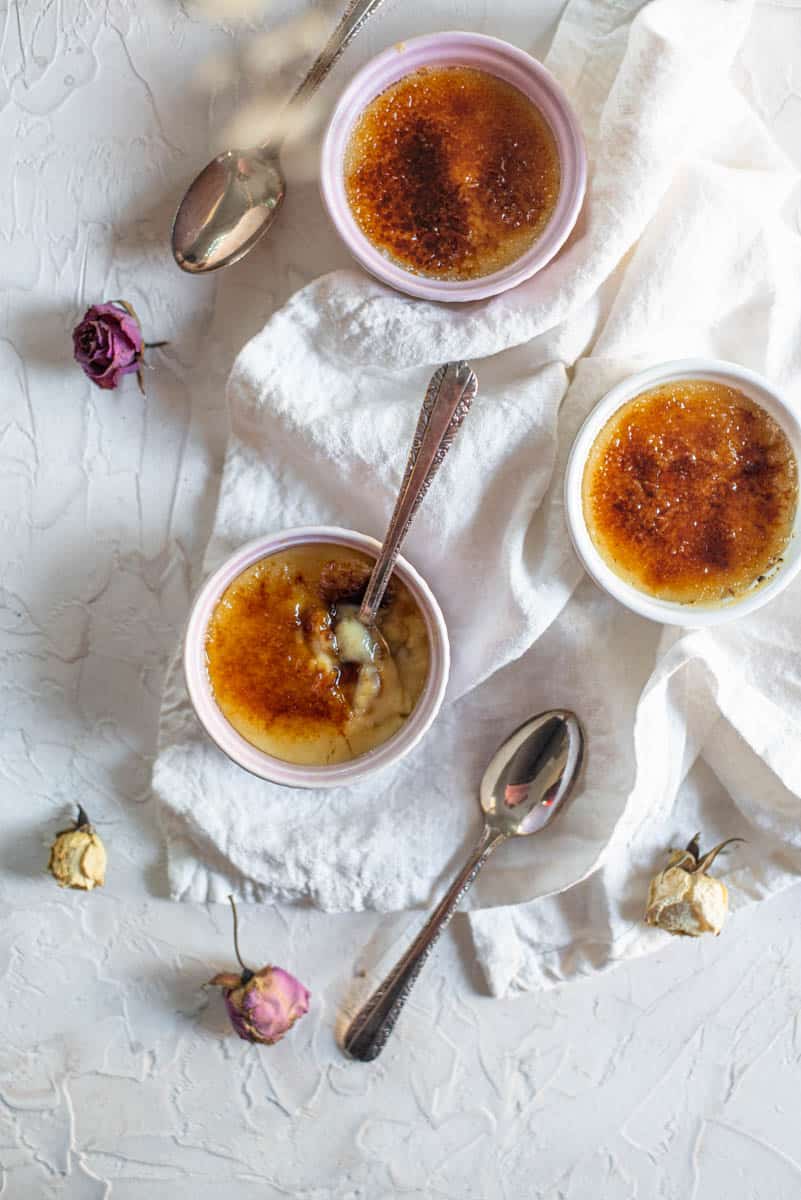 Easy + Delicious Vegan Crème Brûlée by No Dairy No Cry
The easiest and most delectable crème brûlée! Made free from dairy, egg, peanut, tree nuts, and wheat/gluten. You’re going to love this one!!
Check out this recipe

Now remember, these JUST Egg recipes are here to inspire you to try new things and branch out in the kitchen. If you’ve got an idea for a recipe, go ahead and give it a try. Again, you can use JUST Egg in ANY recipe that calls for regular eggs (with yolk – it does not do so well as an egg white). Use 3 tablespoons of JUST Egg for every 1 egg.

If you give any of these recipes a try, please leave a comment and let me know what you think!