This thick and creamy vegan potato corn chowder is made without any added oil or wheat. It’s WFPB compliant, only requires 12 ingredients and needs just 20 minutes of prep time. It’s the perfect weeknight soup when you’re craving something healthy yet hearty. Have this chowder on the dinner table in less than an hour.

Before I turned vegan, I was a huge fan of both corn chowder and clam chowder. There’s something so comforting about a thick and creamy soup full of hearty potatoes and vegetables.

This corn chowder is inspired by a vegan potato soup I had in Maui, Hawaii at a restaurant called Monkeypod. They used fresh coconut milk in their chowder and it was so rich and creamy I couldn’t believe it didn’t have dairy!

Most of the time needed to make this corn chowder is spent with the chowder simmering on it’s own. Getting it prepped and in the pot is super quick and easy!

How do you thicken soup without dairy?

The starches in the gold potatoes will thicken this vegan corn chowder soup naturally. No slurries of corn starch or flour rouxs needed here!

What made my potato soup grainy?

If you over cook the potatoes or the corn chowder in general, it can start to become grainy. Just cook the chowder enough until the potatoes are easily pierced with a fork and remove from heat.

My chowder didn’t thicken. What did I do wrong?

When you first begin simmering this chowder it may look like too much liquid. And if you don’t cook it for long enough, it will likely be thin, like a milky soup broth. Be sure to cook the chowder for the full 25-30 minutes on a medium-low heat for ultra thick and creamy chowder soup texture. The potatoes need time to release their starches to thicken the chowder naturally.

I only have canned coconut milk. Can I use it? 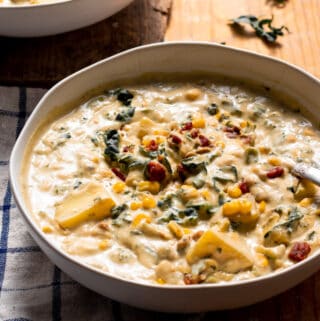 This recipe was originally published April 20, 2020 and was updated on March 8, 2021 to include new recipe photos, step by step process photos, an ingredients photo, FAQs, expert tips, and an improved written recipe.