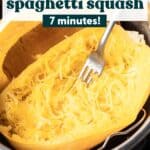 This Instant Pot Spaghetti Squash is going to be your new favorite way to cook spaghetti squash. It takes just 7 minutes of pressure cooking and is ready to eat in less than 20 minutes total! This easy recipe is ideal for busy weeknights when you still want to cook a healthy home-cooked meal.

What is Spaghetti Squash?

Spaghetti squash is a low carb winter squash that can be found at most grocery stores between early Fall and Winter months. Spaghetti squash is neutral in flavor, so it is a great swap for traditional wheat spaghetti noodles in a variety of recipes. Throw some spaghetti sauce on top and have a healthy dinner ready in no time!

It may become one of your favorite recipes!

All you need is 1 cup of water and a spaghetti squash around 3 to 4 pounds in weight. You can also pressure cook ½ of the squash at a time and make my Vegan Spaghetti Squash Lasagna Boats!

Why You’ll Love this Method

How to Cook Spaghetti Squash in the Instant Pot

Finish it off with some vegan parmesan cheese, melty vegan cheese or Tofu Mozzarella.

Leftover cooked spaghetti squash can be stored in the fridge for up to 1 week or in the freezer for up to 6 months. For best results, store the squash in an airtight container such as a zip top bag or a glass Tupperware container.

If freezing, I recommend refrigerating overnight to help drain any excess liquid from the squash before freezing. This will help prevent freezer burn and prepare the squash for optimal freezing results.

Spaghetti squash can be reheated in the microwave (fastest), oven, or on the stovetop. If you are putting the spaghetti squash into a warm sauce, you can reheat it with almost zero prep by thawing it in the fridge and then mixing it straight into the warm sauce!

How do you cook spaghetti squash so it’s not mushy?

The best method to make sure your spaghetti squash doesn’t get too mushy in the Instant Pot or similar electric pressure cooker is to make sure you do not overcook it. Make sure the total time for cooking is only 7 minutes, then immediately release the remaining pressure for al dente spaghetti noodles. If you allow the pot to naturally release pressure, the squash will overcook and it will become mushy so watch carefully.

Do you have to cut the spaghetti squash in half before cooking it?

Do you clean out a spaghetti squash before cooking? 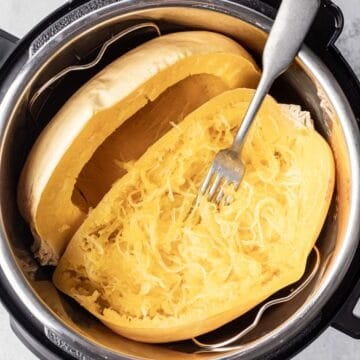 Photography by: Your Home, Made Healthy